May 8, 2017 / julesgilson / 18 Comments
UPDATE: Slightly Embarrassing, version 5.2 is included in the Prusa Drivers Package – read here…
Later versions of Netfabb Basic can be downloaded  from here 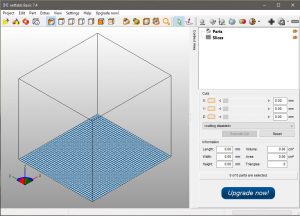 Although I am in the middle of building a 3D printer, it has been about a year since I last prepared a 3D model for 3D printing. Part of my process was to use Netfabb for repairing meshes so that I could get manifold parts ready for printing.

At that time there was a version of Netfabb available called Netfabb Basic, or Free – which was, well free! Great tool not just for mesh repairs but the best tool I have found for measuring 3D meshes, specifically STL files.

So, now that I need to be preparing these files again and having installed a new desktop since last using Netfabb, I went to download it…. except it’s not really there anymore.

When I say not really there anymore I mean that Netfabb the company was bought by Autodesk – and they decided to make Netfabb a commercial product. Boo. I noticed that if you persevere you can get an unlimited time trial version, which I did install. But it seems that Autodesk have decided to remove the measurement tools from this version!!! One of the main reasons I used it. I am still not sure if I have gone mad and am just missing something but when I went from the 30 day trial to the unlicensed version suddenly no measurement button….

So I set out trying to find a copy of the older Netfabb Basic – feeling sure that would be easy. Well it is and it isn’t. I thought I might as well get the latest version of Netfabb Basic before it was swallowed by Autodesk. Longish story shortish, I couldn’t find a version history. By powers of deduction I believe that version 7.4 was the last (I find no reference to 7.5……)

It seems someone else thought it would be good to keep these downloads available, and the version I used can be downloaded from GitHub here (7.4.0 – Windows 32 Bit).

I have run it on Windows 10, both on a 64 bit and 32 bit machine and both seem to work fine. You can just chuck the contents of the zip file somewhere and open netfabb.exe.

I will be keeping the zip file tucked away somewhere, so if that link goes dead, give me a shout and I can get it to you.

I also found a copy of the version 7 manual, which can be downloaded here.

As always, hope this is useful to someone, someday.

A Better Prusa i3 Frame Template?